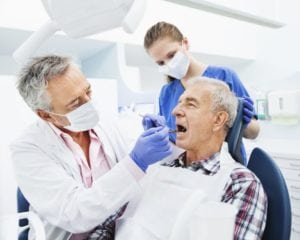 One of the latest finds in the realm of dentistry involves a study that found men who showed a history of periodontal disease could have a greater chance of developing pancreatic cancer, which is one of the leading causes of cancer.

Researchers from multiple schools including Harvard School of Public Health, the University of San Juan, and the Dana-Farber Cancer Institute conducted the study.

During the duration of the study, roughly 51,000 male health professionals varying between the ages of 40 and 75 were followed for 16 years. During this period, it was discovered that 216 men had developed pancreatic cancer.

The Study Results & What They Mean

Now, 216 is a very small number compared to the 51,000 sample size of males followed during the study. However, this number was adjusted for all other variables including smoking history, diabetes, obesity, diet factors, and other variables that could skew results.

Understand that these results should not be interpreted as an “If A, then B” scenario – or a cause and effect scenario. These statistics make a strong correlation, but should not be considered causation.

However you want to interpret the study, one thing is clear: that if you suffer from a periodontal disease at all, this is one of many reasons why you should reverse your bad habits and works towards a healthy oral hygiene routine. Periodontal disease, as the years go on, continues to be linked with many different diseases and ailments. Excellent oral hygiene begins with brushing & flossing every single day with proper form.

For those wondering, periodontal disease is an infection of the tissues and gums that support your teeth, causing them areas to break down often starting with decay caused by a lack of proper oral hygiene care. It is easily preventable and may be completely reversed in its early stages.